Snake Goddess indicates figurines of a woman holding a snake in each hand found during excavation of Minoan archaeological sites in Crete dating from approximately 1600 BCE. These figurines were found only in house sanctuaries, where the snake appears as "the snake of the household", and they are probably related with the Paleolithic tradition regarding women and domesticity. Evans tentatively linked the snake goddess with the Egyptian snake goddess Wadjet. The first 'Snake Goddess' figurines to be discovered were found by the British archaeologist Arthur Evans in 1903, in the temple repositories of Knossos. The figurines are made of faience, a technique for glazing earthenware and other ceramic vessels by using a quartz paste. This material symbolized in old Egypt the renewal of life, therefore it was used in the funeral cult and in the sanctuaries. After firing this produces bright colors and a lustrous sheen.

These two figurines are today exhibited at the Herakleion Archeological Museum in Crete. It is possible that they illustrate the fashion of dress of Minoan women: a tight bodice which left the breasts bare, a long flounced skirt, and an apron made of material with embroidered or woven decoration. The larger of these figures has snakes crawling over her arms up to her tiara. The smaller figure holds two snakes in her raised hands and a small animal is perched on her head, which seems to be the imitation of a panther. These were usually symbols of an earth goddess.

In particular, one of the snake goddesses was found in few pieces apart, and was later filled with a solution of paraffin to preserve it from further damage. The goddess is depicted just as in other statues (crown on head, hands grasping snakes and so on…) The expression on her face is described as lifelike, and is also wearing the typical Minoan dress. Also another figure found in Berlin, made of bronze, looks more like a snake charmer with the snakes on top of her head. Many Minoan statues and 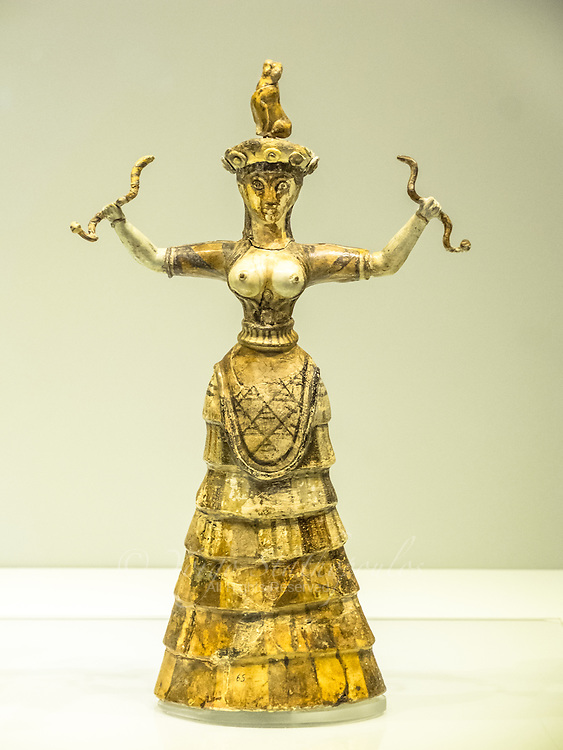